At the 2022 BMW Berlin Marathon post-race conference, marathon legend Eliud Kipchoge said he is not considering retiring despite breaking his own world record.

When questioned by a Canadian journalist if he would emulate the likes of Serena Williams and Roger Federer, who retired from sports at the age of 40, Kipchoge clarified that retirement had not crossed his mind.

The 37-year-old runner also revealed he has no aspirations to complete a marathon in under two hours anytime soon.

“You know I’m an African, and in Africa we believe that we chase one world record at a time. So the rabbit which we were chasing as a team was the 2022 Berlin marathon,” he commented

He crossed the finish line in Berlin on Sunday in 2:01.09, cutting off 30 seconds from the previous world record he had established back in 2018. 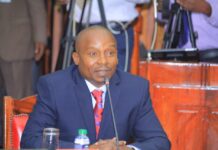