The late former president Daniel Moi’s remains will be ferried to Parliament and Nyayo Stadium by a gun carriage, a tradition that is widely used in State funerals. 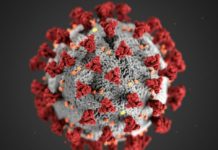 Eliud Kipchoge talks about his retirement